Montessori is an innovative, child-centric  form of education developed in the early 1900’s by Dr. Maria Montessori, an inspiring, visionary woman ahead of her time.  The goal of Montessori education is to foster each child’s intrinsic desire to learn.  Programs are designed to develop the whole child and prepare students to achieve their full potential, ready to step out into the world as confident, respectful, and peaceful citizens.   Each child is celebrated as a unique individual possessing valuable qualities that contribute in a meaningful to their classroom and school community. With careful observation of each child as one of their primary tasks, Montessori teachers guide rather than instruct students, linking them with lessons that meet their interests, needs, and developmental level.  This approach encourages children to become active seekers of knowledge and cultivates an attitude of life-long learning. Montessori students are given the freedom and support to question, probe deeply, and make meaningful connections.  As such, Montessori students develop into confident, enthusiastic, self-directed learners  who are prepared to make meaningful contributions in our modern world as critical thinkers, collaborative workers, and compassionate citizens.

Dr. Maria Montessori was born in Ancona, Italy, in 1870 to an educated, middle-class family. Against considerable odds, she attended school to study science, a subject at that time considered to be man’s work; she became the first woman to graduate from the University of Rome Medical School.

As a doctor, Montessori specialized in pediatrics and psychiatry. Through the free clinics at the University of Rome, she frequently attended to children of the working class and poor. This work convinced her that most babies are born into the world with great human potential and that intelligence is neither rare nor relegated to the wealthy. Dr. Montessori also visited area asylums and treated many children with mental disabilities. She observed their great need for mental stimulation and developed many of her revolutionary hands-on materials to use with these children. After working with her, the children performed as well as or better than students in established schools. This led her to question current teaching methods and she returned to the university to study pedagogy, the science of teaching.

Soon after, Dr. Montessori was invited to open a school in a poor neighborhood in San Lorenzo, Italy. Her first class was of fifty children ages 3-6, many of them neglected, hungry, and dirty. This school was the first Casa dei Bambini, or Children’s House. Montessori began by introducing the children to the same methods and sensorial materials she had previously used in the asylums. She also instructed her new students on how to carry out everyday chores and tasks. The change in the children’s behavior was significant. They went from exhibiting classical signs of neglect—aggressiveness, crying, apathy—to displaying a sense of competence and self-worth through their engagement in these new constructive activities and tasks. She developed her methods and materials education through careful observation of the children’s needs and abilities. The school received attention overnight, and many visitors came to witness the changes in the children. This Casa dei Bambini became an excellent laboratory where Montessori and others could observe the development of the children and their interaction with the materials. At the requests of others, Montessori began to duplicate her school in other varied settings, with the same positive results. She also began traveling and teaching all over the world, offering her discoveries, founding schools, and writing books and articles about children and education. 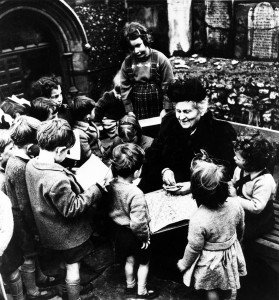 Much of Montessori’’s life and work occurred against the backdrop of war, during which she witnessed the terrible effects of conflict on communities, children, and their families. Montessori was forced from her home in Italy during World War II for her anti-fascist views and subsequently lived and worked in India. It was during this time that she developed Education for Peace, turning her focus to the importance of educating children about resolving conflict and living in community. Instructing children in peaceful living is foundational to the Montessori method. This emphasis led her to be nominated three times for the Nobel Peace Prize.

In keeping with her philosophy of peace and community, Montessori considered herself a citizen of the world—not just Italy—and as such requested to be buried wherever she died. She passed away in 1952 and is buried in a village near The Hague in the Netherlands.

Dr. Montessori’s philosophy of education grew from her training and work as a scientist, and its basis in scientific inquiry was groundbreaking. She was the first educator to view the classroom as a laboratory for observing children and their amazing capabilities. She was revolutionary in many of her beliefs: that educational ideas and practices must be tested to ensure that they aid children in their growth, that respect for children and belief in their potential is the most fundamental aspect of a positive school environment, and that all children are born with tremendous ability and potential which must be nurtured through a carefully and lovingly prepared environment.